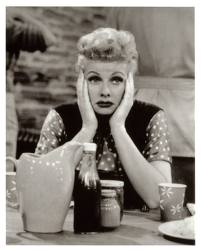 I’ve been cruising for mommy friends like a red-assed baboon during mating season.

I have a neighbor with a son Clare’s age.

Today I pushed my stroller in front of her house six times, stopping to tie my shoelaces, adjust the locking devices on my full-swivel Britax front wheels, perform a jittery Tai Chi set including:

The White Crane Spreads Its Wings and Carry The Tiger Over The Mountain.

As I began Repulse The Monkey my neighbor stuck her head out her front door. “Uh, did you want to come in?” she asked.

I tried to act casual, indicating Clare, “We’ve got a mommy-and-me Gymboree class in three hours.”

“Isn’t that the place where teachers on amphetamines flap the rainbow parachute at you and blow bubbles in your eyes as they chase you around the padded blocks screaming, ‘Who’s seen Gymbo?'”

“Well, maybe another time,” she offered, about to pull her door closed.

“No, please, I think we could squeeze in a visit,” I cried, heart fluttering like a tissue bouquet in a whirlwind.

Lately, I’ve felt like Lucy Ricardo in the episode where she joins the “Friends of the Friendless.”

My old friends don’t have kids and strangely they don’t want to hang around with me and mine. And I never made mom friends because their kids wanted all their attention which I thought was annoying.

When Clare was brand new, I was inundated with company and had a write-from-home gig. So the first year went by in a blur.

But the job ended, the visitors ebbed away and my husband went back to work — where he gets to talk to adults.

And isn’t nerve-jangled by a toddler who frequently tries to kill herself by falling face-first into the toilet where she could drown.

(I just want my clothes cleaned, not a three course meal).

So, I woke up yesterday and realized something about myself. I seem to have inadvertently become a stay-at-home mom with no friends aka a Lonely Mommy.

I wasn’t planning to “stay home” with any children I had.

To me, stay-at-home moms seemed soft and edgeless. Not too bright.

Was I smug? Was I judgmental? Apparently, the answer is yes.

I saw stay-at-home moms as the kind of women who:

When Henry and I discussed having kids before we got married, I let him know I wouldn’t be a traditional wife and mother.

I was going to pursue a screenwriting career and I’d just strap the kid to my chest and take her with me. Running my empire while she suckled at my breast in her sling.

When he suggested, in a tone reserved for patients in the third ward, that might not work, I accused him of wanting to marry his mother!

(A loving, intelligent woman who quit her job to raise four children with no help).

I decided I’d been mistaken. I’d thought Henry was a post-feminist male, but he’d obviously been ruined by a paternalistic household where his mother had forsaken her identity, her very soul, to the succubus that were her kids.

I fell to trying to anticipate her needs before she even had them.

I jumped at every sigh. Is she hungry? Lonely? Tired. Flatulent?

I repositioned her head every few minutes, so it wouldn’t cave in on one side. I put her socks on, she’s cold, off, she’s sweating, on, she’s cold. Some freakin’ empire.

Identity crisis and isolation ensued. I want my mommies!

My neighbor with the kid Clare’s age is called Penny. She belongs to the Beverly Hills Moms Club, even though we live in Rancho Park.

She thinks she can get me in. I even offered to host a play group of stay-at-home moms in my house and wonder if they’ll like my ball pool. Will it be up to snuff?

“Thanks for inviting me in,” I said to Penny, as I left her house three hours and one glass of wine (in Sweden they allow one glass of wine during pregnancy – a civilized culture) later. “Because if I had to go to mommy-and-me Gymboree one more time I was going to shove one of those bubble blowers up somebody’s underpaid ass!