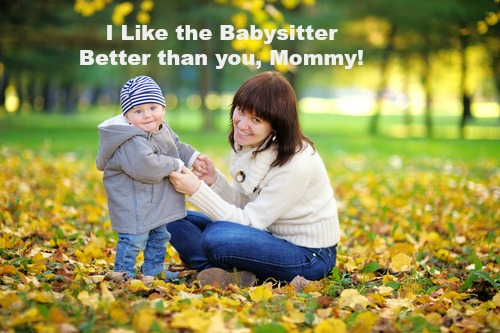 Henry’s mad at me for being mad at him regarding what time he comes home from work, which is the admittedly reasonable hour of six-thirty, but is too late to have a family dinner, which is the foundation for successfully relating to our children so they don’t grow up to become American Taliban.

I know this is true because the trillion dollar There’s-A-Right-Way-Your-Kid-Should-Fart parenting industry tells me so.

“Honey,” Henry said in a martyred tone, “Do you really think I’d rather be…”

CLICK. I hung up on him. Which felt deeply gratifying for about thirty seconds. Then I worried I’d lost all credibility as the real martyr in this marriage and wouldn’t be able to leverage my pregnant state to make me right about EVERYTHING.

Also I want to fire the new babysitter.

Yes I know. The fact I have a babysitter undermines my martyr status, but Henry hasn’t seemed to notice because he’s not a score keeper like me, the trusting fool! Mwhahahaha!

We hired Adrine the Armenian lady to help with my toddler Clare while I work from home.

My dear diva friend, Juan Carlo tells me this was a huge mistake because Armenians are a cold, humorless people. He thinks I should’ve hired one of his Mexican countrywomen, who are warmer and given to hilarity.

However, Adrine has turned out to be extremely warm, funny, outgoing and very hands-on. Perhaps too much so.

Granted I’m supposed to be working in the next room, but who does she think she is feeding, clothing and putting my kid down for a nap?? Yesterday – Black Tuesday – I broke from work to put Clare down for her nap and she said, “Addy, not mommy.”

The “not mommy” administered a pain far greater than the pain I felt when Agamir Najarian refused to kiss me in the parking lot outside the College Uni dorms my freshman year of college after I made a pass at him. (Agamir, it must be noted, was Armenian. And hopefully gay?)

I’ve marked my Day Planner one month from today. “Decide about babysitter” it says (and “Be nicer to Henry” — a weak moment).

I might even think about hiring an au pair instead. This way I can at least give someone the chance to experience a new culture and learn a new language at the same time . . . that means I’m being nice, right?

In the meantime, I catch myself acting toward Clare the way I did toward Agamir when I was eighteen. Casual, cavalier, like I’ve got better things to do than win her over. But I’m dancing as fast as I can.