I’m obsessed with The Sound of Music. I watch it compulsively, bursting into tears every time someone bursts into song. Especially the song about, Maria, the character played by Julie Andrews.

“How do you solve a problem like Maria? How do you catch a cloud and pin it down?”

I know this has something to do with hormones.

This is prototypical pregnancy behavior, eating chocolate pudding and sobbing while watching a musical in the deep wallow of a chenille couch. But I do think there’s an authentic emotional corollary to the movie and becoming the mother of small children.

She’s a virginal nun who still looks smokin’ hot emerging from an Austrian pond dripping wet in her form-fitting dirndl with the waist of a whippet and the breasts of Aphrodite (I might be a bit fixated, we notice, with breasts).

Maria loves children, has a sense of humor about them, not overreacting and calling Lisle a “whore” when the nubile teenager climbs through her window during a rainstorm after necking with Rolf the telegram boy who’d seduced her with all that “You are Sixteen Going on Seventeen” business.

Maria is appropriate with her eligible boss, the Captain; never thinking of trying to attract him, despite the fact he’s the wealthy owner of chiseled good looks, wandering about his Austrian manse in hip-hugging jodhpurs, singing Edelweiss in a soft contralto that demonstrates he’s both sensitive and macho, hence masterful in the sack.

Maria doesn’t even realize she’s in love with the Captain until that ruthless vixen The Baroness Von Schrader tells her.

Then, being humble and chaste, she honorably leaves when any self-respecting American woman pushing thirty would’ve rapidly lowered the décolletage of all her frocks.

Finally, after the Captain marries her, Maria actually agrees to flee the Austrian mansion with the gold gilt walls, forty bedrooms, chef and chauffeur, to climb the Alps into exile and Switzerland (perhaps the Captain has some cash stashed there?) to help her husband avoid being indoctrinated into the Third Reich.

What pregnant woman wouldn’t sob watching The Sound of Music?

Maria’s the dream of romantic motherhood. To be the saint who inspired seven children and their stoic father to sing again.

Who inspired the lyrics, “How do you keep a wave upon the sand? How do you hold a moonbeam in your hand?”

And with seven stepchildren she most likely won’t have to bear the Captain any more children, getting pregnant and lying on the couch eating chocolate pudding, gaining forty pounds, mostly in her thighs, which’ve begun to look like Easter hams. 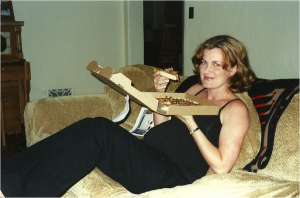 I bought the soundtrack to The Sound of Music and nostalgically play it in my daughter Clare’s bedroom, hoping for a moment of bonding and connection.

So far she could care less.

She’s got piano keys to slam her fists on, hammers to bang, cupboards and drawers to open, empty, close, open, stock, close.

She’s got naps to avoid, crying lung exercises to perform in ten-set reps and food to disdain. She wants my full attention, but to be left alone.

She’s what I didn’t know I wanted in my twenties and what I thought wouldn’t happen to someone unlucky like me in my thirties.

Yet here she is, the best thing that ever happened to me after my marriage and I have the nerve to sometimes feel bored? And lonely?

Would Maria be bored?

Or would she create play wear from disposable diapers and teach Clare to sing acapella while swinging from a tree?

On the upside. I came home today from a morning “off duty” and was greeted at the gate by my daughter, wearing her jean sunhat with the white daisy, yelling, “Mommy, mommy!”

All eight of her teeth flashed demonstrating what could only be described as a great deal of affection.

When I picked her up, she turned her face and kissed me rather passionately on the lips, three times and all I could think was:

“There you are, standing there loving me, whether or not you should, so somewhere in my youth … or childhood … I must have done something good.”